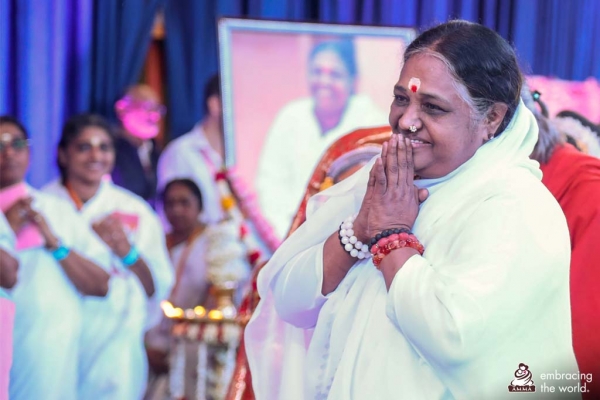 Amma’s 66th Birthday Celebrations unfolded in Amritapuri with tens of thousands of devotees and well-wishers from across India and around the world taking part. In the morning, they gathered to hear Amma’s address and participate in meditation and prayers for world peace.

“Nature is everything to us,” Amma said as she emphasized the importance of respecting and protecting the environment. “We are the children of our revered Mother Nature. She only ever had love and compassion for us. We, on the other hand, have just stomped all over her and kicked her in the chest. Now that loving mother has fallen ill and is exhausted.”

Amma also stressed the importance of prioritising spiritual values in life. She said, “If we stop giving moral values the place they deserve, our life will rot away like a log infested with termites. We will lack the courage to face problems in life.

"This is why the ancient sages reflected on dharma-bodham—the awareness of what should and should not be done—as all-important. It is vital that we have this awareness in order to ensure that all of our social interactions are as equally beneficial to others as they are to us.”

Among the new humanitarian initiatives were:

- Financial aid of ₹500,000 for each family of the 40 soldiers with India’s Central Reserve Police Force who were killed in the terror attack in Pulwama, Jammu & Kashmir on February 14, 2019.

- Financial aid of ₹100,000 to each of the families who lost a member during the torrential rains and landslides of the 2019 Kerala monsoon.

- Free surgeries for 400 people in poverty at the Amrita Institute of Medical Sciences (AIMS) in Kochi, Kerala.

- Ten free homes for the poor in Kannur, Kerala.

- Ten OceanNet systems to fishermen, allowing them to maintain Internet connections when they are out at sea and past the normal range of connectivity.

On the educational front, a new Technology Enabling Centre and a School for Sustainable Development were inaugurated for Amrita Vishwa Vidyapeetham (Amrita University). The university also announced a ₹250,000,000 ($3.5 million US) PhD fellowship program called “Amrita E4LIFE”. The program will sponsor PhDs in the field of Sustainable Development for 100 students from India and around the world.

Amrita University’s Vice-Chancellor, Dr P Venkat Rangan, remarked, “To date, the Mata Amritanandamayi Math has adopted more than 100 villages all over India. Under Chancellor Amma’s direction, faculty and students at Amrita have been striving to help these villages by creating tailor-made solutions that foster sustainable development and social-economic progress.

“It is Amma’s belief that such programs help not only the villagers, but also the students—awakening compassion in their hearts. It is to facilitate this vision of Amma’s and to support youth interested in pursuing higher education to uplift the poor and needy that we have created this new PhD fellowship program.”

The Math also gave 400,000 free saris to women enrolled in its upliftment programs, such as AmritaSREE Self-Help Groups. In addition, free weddings were conducted for couples from impoverished families, complete with the traditional gold ornaments.

In his welcome speech, Swami Amritaswarupananda, the Vice-Chairman of the Mata Amritanandamayi Math, extolled Amma as a paragon of selfless, compassionate service to suffering humanity.

“For Amma, service to humanity is nonstop,” he said. “No vacations, no sick days, no leave applications. Traveling all over the world, Amma is leading people of all nations, all religious faiths and all cultures in a truly universal prayer: ‘Lokah Samastah Sukhino Bhavantu—May all beings all over the world be happy.’ In fact, Amma is this mantra’s living embodiment in thought, word and deed.”

On the evening of the 26th, an environmental protection program called Amritavanam was started for youth with AYUDH India to plant dense forests. It is based on the Japanese state-of-the-art Miyawaki method of plantation and combined with India’s ancient knowledge of connection with Nature.

As well, Amma inaugurated a program in Australia to uplift young Indigenous women living in the Northern Territory of the country. The Galupa Homeland Project works in collaboration with a nonprofit called Traditional Cultural Practices. Their purpose is to provide these young and vulnerable women with safe living conditions, alongside reconnecting them with their community elders. The elders teach the young women their traditional arts and inspire them to honour their land and culture.

Amrita Australia has just purchased an air-conditioned accommodation unit for the young women in which they can work and live, since the only other accommodation in the Galupa Homeland is an open shed. Now they are living at Galupa Safety House, where they are supported and led by Gumatj Clan Elder, Gayili Marika Yunupingu.

Amma’s 66th birthday gathering came to a close on September 28th just after 11am, with Amma having given her famous darshan in the form of a motherly embrace to the tens of thousands of people who attended the event.

Photo 1: Tens of thousands of devotees and well-wishers from across India and around the world arrived in Amritapuri to take part in Amma’s 66th Birthday Celebrations.

Photo 2: In advance preparation for the birthday, Swami Amritatmananda lead a team of volunteers to clean up the small rural village of Vallickavu where Amritapuri is located.

Photo 3: During the morning program on the 27th, the crowds gathered to participate in meditation and prayers for world peace.

Photo 4: In her address, Amma emphasized the importance of respecting and protecting Mother Nature.

Photo 5: Financial aid of ₹500,000 for each family was distributed to relatives of the 40 soldiers with India’s Central Reserve Police Force who were killed in the terror attack in Pulwama, Jammu & Kashmir on February 14, 2019.

Photo 6: A School for Sustainable Development was inaugurated for Amrita Vishwa Vidyapeetham (Amrita University) and includes a PhD program.

Photo 7: The Math gave 400,000 free saris to women enrolled in its upliftment programs, such as AmritaSREE Self-Help Groups.

Photo 8: Volunteers with AYUDH, our youth wing, worked throughout the days of the birthday event to handle waste management and keep the premises clean.