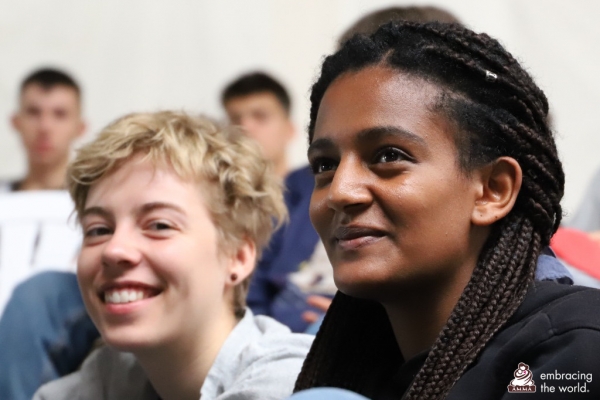 by Preeta with AYUDH Europe

Three hundred young people from all over Europe participated in the 15th annual AYUDH Europe Youth Summit that was held at the MA Center in Hof Herrenberg, Germany. The week-long gathering focused on the theme of Celebrating Diversity. Several sub-themes included Diversity Within Ourselves, Diversity in Cultures, Diversity in Communities and People, Biodiversity and Diversity in Emotions.

While exploring the theme of Diversity Within Ourselves, Lucia Rijker—who is a former World Champion in kickboxing and boxing—spoke openly about her life experiences and encouraged everyone to focus on challenging our own perceptions of ourselves.

“If you look through the frame of comparison it’s quite scary,” she explained. “Instead of comparing yourself to someone, aspire towards a quality in them that you admire. This can encourage us to grow, but we can never be them or know them fully, so we should never be envious and want to be them.”

French space scientist Mathieu Labonne spoke at length about climate change and biodiversity. He facilitated an interactive “fishbowl” debate with participants. Speakers are seated in a circle with one chair left empty at all times. If somebody from the audience wants to join the discussion, they may occupy the empty chair and one of the people already seated must vacate their position.

Br Shubamrita Chaitanya, a monk and mediation teacher from India who is one of Amma’s senior disciples, received a standing ovation for his inspiring talk and Q&A session on Diversity in Cultures. He spoke at length about the role of spirituality in bringing cultures together.

“Differences by themselves don’t divide us. It is the inability to understand, accept and celebrate those differences that causes divisions,” he shared.

Diversity in Communities and People was discussed as a theme by Meg Jones, who has worked for more than 12 years with the United Nations in the areas of human rights, trade, economic empowerment, and the Sustainable Development Goals (SDGs).

She spoke about how an individual can make a difference on a global scale through advocacy at local and national levels, and that we can use United Nations Treaties to affect legislators and access available resources. She offered practical advice on how AYUDH Europe can influence policy-making.

The summit included the culmination of a month-long collaboration between AYUDH Europe and UNESCO-MGIEP. It took place on July 19th in the form of an official iTAGe (Talking Across Generations on Education) event, where the role of education in diversity and inclusion was discussed.

The keynote address at the summit was delivered by Swami Amritaswarupananda Puri, Vice-President of Mata Amritanandamayi Math and Amma’s most senior disciple.

“All emotions, good and bad, are tools or skills that can be used to elevate ourselves. They are like rungs of a ladder. Use them intelligently and step-by-step you can increase your level of happiness.”

A highlight of the week came in the form of The Human Library. Here participants were challenged to “unjudge” someone by interacting with “human books”. Twenty participants voluntarily acted as books in order to share their personal life experiences in a safe space. Each one told a story about a vulnerable part of themselves and learned how to challenge the preconceptions and prejudices of the “readers”.

The 15th annual European Youth Summit was was carried out with the support of the European Union, UNESCO-MGIEP and the State Government of Hessen, Germany. It was an action-packed week of learning, self-reflection, non-formal learning and fun. New friendships were formed, new talents emerged, and everyone nurtured their understanding of diversity and inclusion.

As we left the peaceful Germany countryside to head back home to our fast-paced lives, we held tightly to the understanding that only through embracing our differences can we create the world we want to live in. As together we are strong, together we are one, together we are AYUDH.

Photo 3: The “fishbowl” debate from a distance.

Photo 4: Members of the “Dance As You Are” workshop prepare for their presentation at the talent show.

News of EMBRACING THE WORLD

Leer más...
Call of the heart: Health care for tribal people in Kerala
Wayanad, Kerala Amma teaches that everyone, whether rich or poor, can make a difference in the lives of others. No selfless gesture is insignificant. The doctors in charge of the...

Leer más...
Protesting against climate change in the context of kindness: AYUDH Scotland
Oban, Scotland The climate crisis is one of the most urgent issues we face in the modern world, due to the finite time in which we have to solve it...