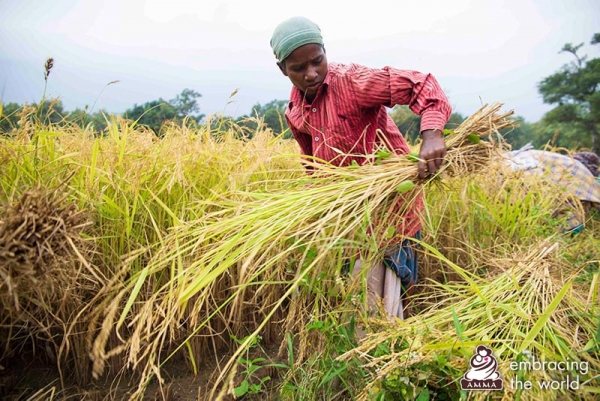 In February 2020, Amrita SeRVe took a fundamental step toward a more regenerative, healthier and organic form of agriculture. The tribal community in the village of Sadivayal (located in the heart of Bholapetti Reserve Forest, Coimbatore District, Tamil Nadu) received Organic-Agriculture certification, becoming the first Amrita SeRVe farmers’ group to obtain this status. Their certification is with regards to the production of mixed vegetables, mango and rice.

The process of certification began in 2018. Since then, Amrita SeRVe and the Sadivayal farmers have worked together with the common goal of cultivating healthy, organic, high-quality rice and vegetables, while at the same time restoring the land and soil to the standards set by the National Program for Organic Production (NPOP).

Amrita SeRVe has collaborated with Sadivayal farmers in growing organic products since 2016. Together they registered under the Cooperative Society Act, with the name Amrita Vyavasayam Kulu and opened a joint bank account. Through the collaboration, it was Amrita SeRVe’s intention to help the Sadivayal farmers become economically independent and autonomous in terms of decision making. Previously they had been locked into conventional farming methods, and this had resulted in financial losses. The farmers found themselves in debt and consequently were forced to abandon their fields.

After switching to organic farming in 2017, the Sadivayal farmers have finally harvested their first profitable rice crop. Amrita SeRVe helped in selecting the best seed varieties, crop-planning, water-budgeting and in identifying buyers in big markets, thereby removing middlemen. Growing organic rice, and using traditional practices such as cutting, cleaning and sorting, also allowed the farmers to save and sell rice straw. As a result, the market value of their rice increased and they have been able to profit off the growing market demand for organic straws. Moreover, the Sadivayal farmers were finally able to pay off their debts and return to the fields. Now they are flourishing with self-confidence and a positive attitude regarding the future.

Based on their success, in 2019 Amrita Vyavasayam Kulu decided to expand its cultivation of organic rice from 30 to 35 acres. Moreover, the surrounding villages have expressed a desire to learn from them. Sreeni KR, Amrita SeRVe agricultural program manager, says, “By 2019, around five villages converted to rice fields of a similar approach with the traditional Bhavani variety.”

Thanks to this encouraging chain reaction in the neighboring villages, the hope is that more farmers will soon switch to organic agriculture, thereby rejuvenating and revitalizing not only their personal lives, but also the land and the earth.

Photo 1: The farmers planted nearly 600 kilograms of organic Bhavani rice on their joint 30 acres of land.