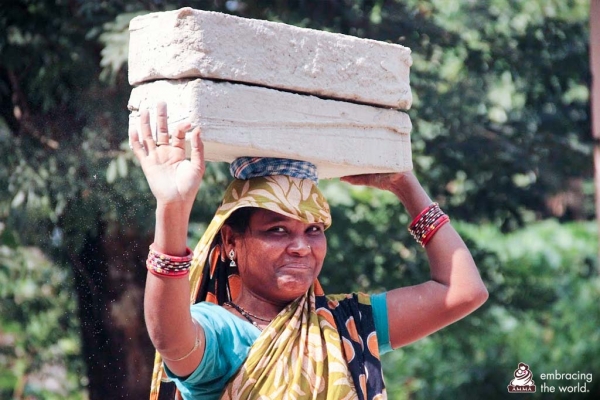 When we first began work in Ratanpur, Bihar, the unsanitary conditions in the village were heartbreaking. The people who live there are Musahars, a Dalit community that faces extreme destitution and poverty. Everyone urinated and defecated outside, as there were no toilets there, and people rarely took baths. They were not educated in basic hygiene and sanitation practices.

We slowly reached out by bathing the children, who were covered in dust and dirt, every two weeks. As people began to understand and accept this, we were able to bathe the children once a week and gain the villagers’ trust.

“We taught the residents how to use the toilet and how to sit,” explains Mausam Devi, AMMACHI Labs facilitator. “Now the villagers are using them and Ratanpur has been declared Open Defecation Free (ODF) by the Government of India.”

The villagers began by gradually practicing the knowledge shared. This has not only improved their health, but saved some of their lives. Meanwhile, the village atmosphere has completely transformed. The people are cleaning themselves externally and internally, as they have begun to value themselves as human beings.

“The women and girls who hardly ever left their homes came out to build toilets with us,” adds Mausam Devi.

Clean water and sanitation is number six of the UN’s 17 Self Development Goals (SDGs). The UN states that while substantial progress has been made in increasing access to clean drinking water and sanitation, billions of people—mostly in rural areas—still lack these basic services.

India is the centerpoint of this global water and sanitation crisis. According to Water.org, 15 percent of the population, 207 million people, still practice open defecation. This is a critical factor contributing to water-borne illness, stunting, and death. With an overall population of 1.38 billion citizens, 65% live in the country’s villages and remote areas, where, of course, the scale of need is immense.

The shortage of water and toilet facilities in India creates an urgent issue for women, as they are more vulnerable to rape and sexual assault when travelling to and from public facilities or open fields. They especially bear the brunt when they step out early in the morning or late in the evening.

Since 2014, the Government of India has achieved significant goals in addressing the issue. It was then the Swachh Bharat Mission began with the vision to eliminate open defecation, a massive behavioral change. Now, more than 100 million toilets are built and have reached 500 million people across 630,000 villages.

It is within this context that Amrita Vishwa Vidyapeetham launched an initiative to address sanitation in villages uniquely coupled with the empowerment of women. The university’s Women’s Empowerment: Rural Toilet Builder and Community Sanitation Program (WE Sanitation) has so far launched in two phases.

The first phase started in 2014 with the focus of skill development and life skills education for women in rural areas. Via Computerized Vocational Education & Training (cVET), Amrita uses a futuristic model of imparting vocational skills through technology. Combined with Life Enrichment Education (LEE), this initiative aims to empower the women by training them to build, maintain and promote their own toilets and achieve open-defecation free (ODF) status in their communities.

The project is a milestone in its social reach, as construction and training are fields that have thus far been limited to men. By the end of phase one in 2016, 120 women built 120 toilets and training took place across India in the states of Goa, Gujarat, Himachal Pradesh, Karnataka, Odisha, Rajasthan, Uttar Pradesh and Uttarakhand.

Phase two has extended the efforts to 21 states and mainly focuses on researching scalability, the possibilities for wider impact and the establishment of best practices. Its centerpiece is community engagement through the establishment of Self-Help Groups (SHGs) and connecting women to more Government of India initiatives.

Today, the women are building their own toilets. They can take it up as their profession and put it to use by building toilets for others. A woman who has learnt this skill can also transfer or teach it to another woman, thus helping to spread the scalability. This model can become a global knowledge base for women’s empowerment and community-led sanitation practices.

AMMACHI Labs has been a major part of the work in innovating low-cost technologies for community development. In order to make the toilet building easy, efficient and economically viable, the team developed a toilet mould using 3D modeling. The mould helps to reduce time and cost, as where conventionally it takes 76 hours to build a toilet, with the mould it takes about 40 hours.

From a larger perspective, what is so crucial and unique about WE Sanitation is that it is not ‘just building toilets’. The construction and plumbing skills learned are a basis for further education in related fields and help in establishing a new channel of livelihood for the women and their families.

It has provided tremendous support to unmarried, single, widowed and other destitute women. They have found a way to independently earn an income and become self-reliant. The larger community also benefits, as the women acquire knowledge about health and sanitation which they share with others.

Even during the COVID-19 pandemic, SHGs trained by AMMACHI Labs have continued toilet construction. For example, the Amritamayi SHG in Guptapada, Odisha had successfully constructed 12 toilets as a paid project. Their skills were in high demand and an additional order came through to make 6 more.

As demand increased from the community, the women's SHG approached the local panchayat (village council) for support in constructing more toilets. However, there was much resistance from the village council.

Therefore, the women mobilized together, led by the AMMACHI Labs Community Organizer, Urmila, and initiated a meeting with block officials to discuss plans. The sanitation officer visited the village and in the end, the Amritamayi SHG was asked to build 5 to 10 toilets and submit their records for government reimbursement.

On March 3rd, 2020, they began construction for the first 10 beneficiaries. With the money earned, they were able to procure more tools and materials for the next project. They even prepared the budget and got quotes from reliable suppliers to source the best materials. Due to the pandemic, work was placed on hold at times, but as restrictions lifted, the team continued. Their commitment and confidence never waned.

This noble initiative of AMMACHI Labs was applauded nationally by India’s Prime Minister, Narendra Modi. He expressed his gratitude to Amma for her contribution towards sanitation and also requested her to start a toilet construction project in the villages of five states of the Ganga River basin, to which Amma agreed.

Amrita, therefore, practices what it preaches. One of the university’s main missions is to ‘educate for life’ and this project can be taken as an apt case-study. It does not only skill the women technically, but also inspires their minds, thoughts and attitudes in positive ways. Let us hope that in future many such organizations work towards improving sanitation in our villages so that the dream of ‘Swachh Bharat’ is realized.

Photo 1: AMMACHI Labs trains women in basic plumbing.
Photo 2: Building toilet walls. (Rajasthan)
Photo 3: Celebrating the digging of the initial toilet pit. (Gujarat)
Photo 4: The village of Ratanpur was in a heartbreaking state when we began sanitation work there. (Bihar)
Photo 5: In villages without toilets, women often have to visit open areas where their safety is at risk. (Bihar)
Photo 6: Women gain a new sense of independence when they can earn for their families. (Odisha)
Photo 7: It has been second nature for the women to gather as a collective and form self-help groups to undertake construction projects. (Uttarakhand)
Photo 8: During the pandemic, women in the village of Guptapada stated their case to local government bodies to gain permission to build. (Odisha)
Photo 9: Celebrating the completion of a project. (Jharkhand)